More than 1,500 athletes gathered in one the country’s high school football hotbeds, out to prove that they truly are some of the best prospects out there. JSerra’s Jakob Wolfe was one of only 25 selected to the Los Angeles Nike SPARQ All-Combine Team.

Wolfe is a 6-4” offensive lineman for the Lions, and is said to be a strong college tackle by the Nike Training Camp Coaches.

“We are proud of how far Jackob has come during his three years as a Lion. His results at the Nike Football Training Camp are a testament to his dedication and work ethic, as well as the strength of the program that the coaching staff has built, and continues to build here at JSerra,” said Jim Hartigan, head football coach. “We feel that Jakob has only scratched the surface of his potential, and look for big things out of him as well as the rest of the team during the upcoming season.” 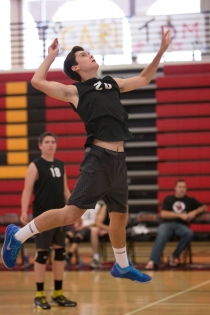 By Victor Carno, The Capistrano Dispatch

The first two sets between the JSerra and Santa Margarita boys volleyball teams April 9 match were neck and neck, the first set ending 25-20 and the second at 25-22, both in JSerra’s favor.

The third and final set is when JSerra (8-6, 2-2 league) kicked things into over-drive and won 25-15, pulling out the three-set win win in their first match against Santa Margarita (6-10, 0-4) in league play. The win pulled the Lions to .500 in Trinity League play.

“There is nothing I would change about the team, they’re playing volleyball at an extremely high level right now,” JSerra head coach Tim Layton said of his team, which has bounced back from losing their first two league games against Mater Dei and St. John Bosco, respectively, with a win over Servite on March 26 and the Eagles.