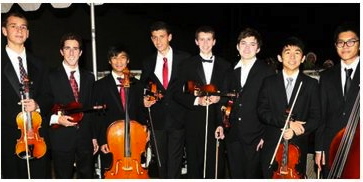 The British Invasion brought us the two most popular rock groups of all time, The Beatles and The Rolling Stones, as well as the liveliest debate in rock history – which band is the greatest? These two legendary bands will engage in a musical “shoot out of the hits” featuring internationally renowned tribute bands, Abbey Road and Jumping Jack Flash.
Five alternating power sets with the two bands coming together on stage for an amazing encore makes this show a once-in-a-lifetime event.

See the JSerra Stings live at the The Coach House in San Juan Capistrano on January 12 at 8 p.m.