JSerra’s class of 2010 is breaking school records and accomplishing many “firsts.” For the 5th consecutive year, JSerra graduates are raising the bar for academic, athletic, and co-curricular excellence.

JSerra President Frank Talarico notes that “the administration and faculty have been honored to have the exceptional students of the class of 2010 as part of the JSerra community.” Principal Tom Waszak added “We know that, like their peers before them, these students are prepared to move onto college as successful, contributing members of their communities.”

The accomplishments of the class of 2010 are too numerous to list. Here are some of the highlights.

Paul Ferrier is JSerra’s first graduate to be accepted to and attend MIT. He was also accepted to many other prestigious universities, including Cornell, Notre Dame, and Northwestern. Michelle Chang will attend Northwestern’s School of Communication, the top school in the field in the nation. Co-valedictorian Emily Storms will attend Sarah Lawrence and is the first JSerra student to be accepted to Wellesley and Barnard colleges.

Trevor Cutler, who will attend the US Air Force Academy, was awarded over $850,000 in scholarships. He was also accepted to West Point, another JSerra first, as well as the US Military Academy. Cutler was the winner of the school’s most prestigious commencement award, the JSerra Award.

Patrick Bowman received over $573,000 in scholarship awards. He will attend the University of San Diego where he will participate in the Navy ROTC program. 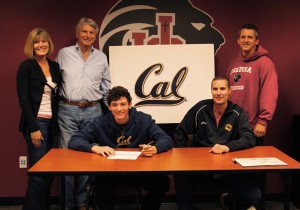 JSerra senior and star high jumper Harrison Steed had a busy weekend. In addition to participating in the 2010 commencement activities at JSerra this past Saturday, Steed also competed in the state track and field competition in high jump and headed to UC Berkeley for his college orientation. Click here to read the OCvarsity.com article on Steed’s whirl wind weekend.

Congratulations to Harrison for his exceptional showing at state. His 6’9″ jump earned him the 4th place title.

He’s a scholar and an athlete.

The JSerra stand-out wide receiver also posted big numbers in the classroom, finishing with a 4.42 GPA.

Behrle, of San Juan Capistrano, plans to hang up his cleats and focus on his studies this fall at USC.

“I don’t know exactly what I want to do,” he says. “But I do know that I want to get in the business field and work with numbers.”

Why did you choose JSerra?

Because I had a lot of opportunity here and a great chance at success.

How well did JSerra prepare you for college – and life beyond? Why?

They taught me valuable lessons and gave me the tools to succeed at the next level.

How did beating Santa Margarita in football rank among your best high school memories?

Definitely among the top few, if not the best, because of the magnitude the game. All the preparation and hours had paid off.

What was your favorite and least favorite subjects and why?

My favorite subjects were math and science because of the teachers and my ability to excel. English was my least favorite.

How challenging was it to balance a demanding athletic schedule with your coursework?

I thought it was very demanding with football. The fall semester of each year would always be the toughest because I had to balance the multiple activities.

What advice would you give to scholar athletes trying to emulate your success?

Make sure to keep a balanced load while keeping your grades up.

How much time did you spend studying?

What is your favorite JSerra memory?

As of right now, Grad Night.

What advice would you give to incoming freshman?