*Currently running on the Patch.com

She did it again.

A week after taking down a 28-year-old record in the 1600 meters at the CIF Southern Section championships at Cerritos College, JSerra senior Katherine Delaney was back in Norwalk Friday for the Masters Meet and turning heads again, this time by chalking up the third-fastest current mile mark in the United States, a 4 minute 42.95-second gem, good for first place overall by a wide margin.

JSerra’s swim team had a season of many “firsts” in 2010. The list of accomplishments is long and impressive. The girls team finished third in the Trinity League, their highest finish yet. The boys team brought home the first team trophy in program history finishing third at the Murrietta Invite. 22 swimmers were recognized as scholar athletes.

Two JSerra swimmers – Daniel Early and Casey Mims – had particularly exceptional seasons. Early competed in the Masters High School meet on May 18, where e placed 15th overall. He achieved All-American Consideration in the 500 free, league titles in 200 free and 500 free, CIF Automatic times in 500 free, and CIF Consideration times in 200 free, just to name a few. Early has signed to swim at UC San Diego in the fall. 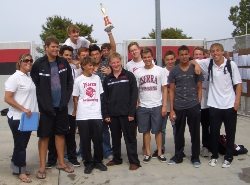 Congratulations to the JSerra swim team and Coach Mary McLaughlin for a fantastic 2010 season.