We are always proud of our Lions. Every year, we see students reach their potential and show the world who they are as individuals. They are first and foremost students, but our Lions are also stellar in other aspects of their lives! We are so proud of the following students who signed their letters of intent to the universities of their dreams! 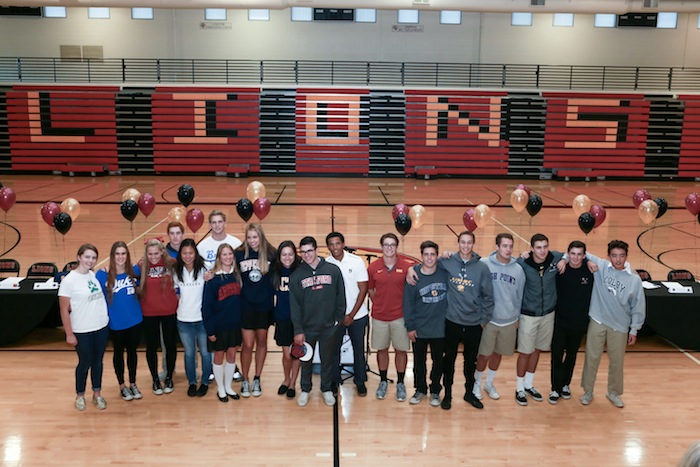 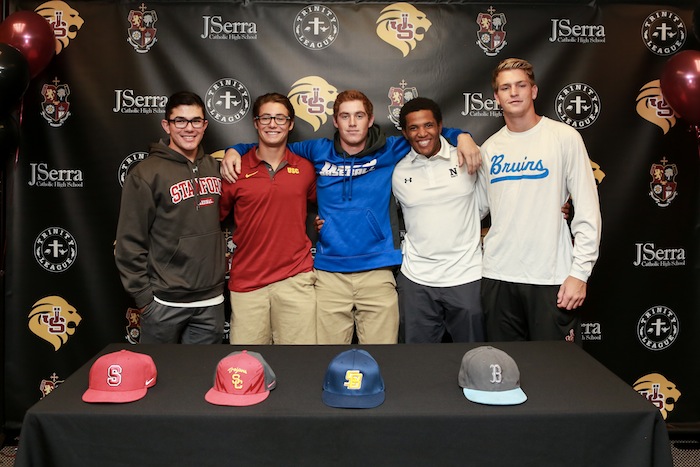 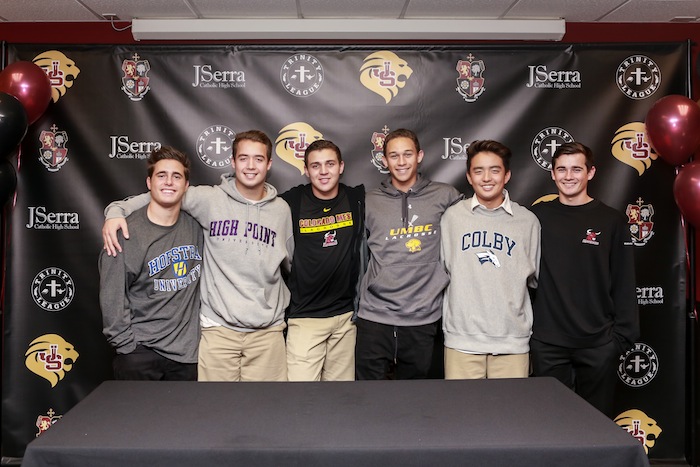 Congratulations! Always remember that everyone at JSerra will be rooting you on in your future endeavors. We know you will make us proud!

We are proud to share more of our Lions recent university commitments! Our Swimming Lions have a fantastic record and we are excited for these two! Kaitlyn Albertoli has committed to Stanford and Brittany Kahn has committed to Duke.

Kaitlyn Albertoli committed to Stanford. An All-County swimmer, Albertoli is a member of the U.S. junior national team for 2013-14, finished second last season in the 50 and 100-yard freestyles at the CIF Division 1 finals. She posted a 22.71 at the Trinity League finals that shared for the county lead. Albertoli was a key member of our CIF Division 1 titles during her freshman and sophomore seasons and is a 2012 and 2016 Olympic Trials qualifier!

Brittany Kahn, distance freestyler, has committed to Duke. As a freshman, her 500-yard freestyle times ranked second in the country. Kahn was on the team to break the national 400-meter record and win the second CIF Championship during her sophomore year.

We are so delighted with our scholar athletes and the feats they can accomplish!

Katie McLaughlin plans to attend the first day of school at JSerra High later this month. But after that, she’ll be on a well-earned absence.

The rising Mission Viejo Nadadores swimmer sealed her spot on the U.S. team for the FINA World Junior Swimming Championships in Dubai, United Arab Emirates, with a stellar performance on the opening night of the Speedo Junior Championships on Monday.

McLaughlin’s time ranks third among U.S. women this year and places her on the U.S. team for junior worlds, which begin Aug. 26.

“I’m so excited,” McLaughlin said. “I’ll be there first day (of school) and then I miss like 10 days. … I’m getting my classes early and I’ve already started to email my teachers just in case.”

McLaughlin finished third behind Cammile Adams, 21, and Maya DiRado, 20, in June at the World Championships trials and said juniors was her main target.

“I’m putting more on myself that I want do better at this meet,” she said. “I’ve been to a couple juniors now, so I know what I should be doing and what I can do.”

The Nadadores’ Nick Norman, 16, also showed what he can do. In the 1,500 freestyle, the Capistrano Valley junior-to-be charged from eighth place at the 200 mark to finish second to Jonathan Roberts of the North Texas Nadadores (15:24.82) in a lifetime-best 15:31.41. Norman sliced just more than 10 seconds off his best.

Norman appears just outside the top-two ranking needed to qualify for Dubai in the 1,500. David Heron of the Nadadores is ranked first with a 15:24.54 from last week’s U.S. Open, followed by Roberts. In the men’s 200 butterfly, Corey Okubo of Aquazot and University High finished fourth in a lifetime-best 1:58.28.

*By the OC Register

It was a day of family fun at JSerra Catholic High School’s pool for “Joy Splash.”

The event June 15 included swim relays, face painting, games, music, food and a chance to meet pro athletes like U.S. Olympic swimmers Kaitlin Sandeno and Chloe Sutton. Funds raised during the event benefit the Never Ever Give Up Foundation, which was started by Rancho Santa Margarita’s Jessie Rees, who died at age 12 of brain cancer.

To view the photo album from the event click Joy Splash.

Instead of playing the role of surprising upstart that marked their championship season in 2012, the Lions were a hunted team this season.

“I think people are coming after them,” JSerra coach Mary McLaughlin said.

But despite the tag of favorite — which usually brings added pressure — JSerra still found its desired destination.

Thanks to an atmosphere of fun and team unity nurtured by McLaughlin, the Lions captured a second straight Division 1 crown, setting a then-national record in the 400-yard freestyle relay and four Orange County records in the process.

For her efforts, McLaughlin has been selected the Register’s girls coach of the year for 2013.

“I want to make (swimming) as fun as possible for them,” the fourth-year coach said. “I try not to make it a big deal, and let them have a good time, and this has been our result.”

JSerra took Division 1 by storm two seasons ago, leaping from a 22nd-place finish in 2011 to its first CIF title.

To read the complete article click Coach of the Year.

Help support a fellow lion and vote for Kaite McLaughlin for OC Varsity Swimmer of the Year.

McLaughlin set the CIF Division l records in both the 200 freestyle and 100 butterfly, ranking her first in both events in Orange County.   She was also part of the national record breaking 1x400m relay team, that included teammates Rebecca Millard, Kaitlyn Albertoli, Britteny Kahn, and Karli Thuen.